Significance of Rath Yatra
On the auspicious day of Ashadh Sud 2 (late June- early July), Devotees in the Sanatan Dhrama celebrate the Rath Yatra festival. Rath means chariot and Yatra – a pilgrimage or procession. It is celebrated all over India and originated in Jagannath Puri, located on the eastern coast of the country.

On many occasions the Lord has embarked on journeys with his Devotees on chariots. One such occasion in particular is mostly celebrated as Rath Yatra. Lord Krishna, accompanied by Balaram, took Subhadra in for a ride in a chariot through the streets of Dwarika to show the city’s splendor. Sage Narad once saw the Lord together with Balram and Subhadra standing motionless listening to Krishna’s pastimes. He then requested that they grant such sight forever. Lord fulfilled his devotee’s wishes. Further pastimes of Lord Jagannath can be read from the Skanda Puran authored by Ved Vyasji. 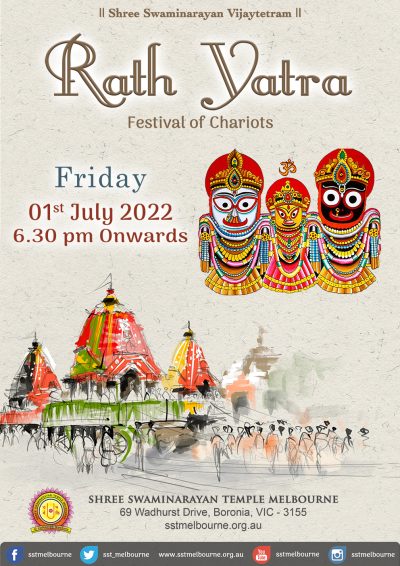